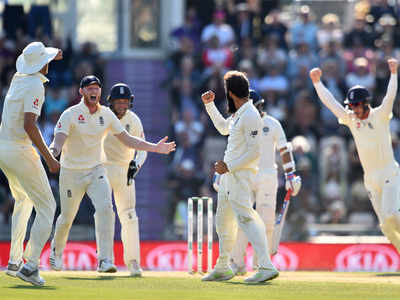 Outside edges are one thing, but India captain Virat Kohli took it to another level when he refused to leave the crease despite being bowled by Moeen Ali in the second Test against England.

Kohli, the country's sporting hero and batting superstar, was cheered to the crease by a 15,000-strong crowd on the opening morning in Chennai.

He failed to score off his first four deliveries. The fifth, tossed up outside off stump, tempted Kohli into an ambitious cover drive.

The ball turned sharply, went between bat and pad and clipped the top of middle and off stump.

A look of disbelief etched on his face as he glanced back at the bails on the ground, he looked pleadingly towards batting partner Rohit Sharma.

The umpire even had to ask for the replay to be shown on the big screen before Kohli finally left the field, still struggling to grasp what had happened to him.

"The last person that stood like that after being clean bowled was WG Grace."

Legend has it that Grace refused to walk and once said "they came to see me bat, not you umpire" when given out lbw.

Within moments of Kohli's dismissal, Grace was trending on Twitter.

It was only the second time Kohli had been bowled by an off-spinner in 89 Tests, while all-rounder Moeen savoured the perfect start to his first Test since August 2019.

"It did turn big but Moeen did him with the drift - he lured him in," former England captain Alastair Cook said on The Cricket Social.

"That was a beautiful ball. If Graeme Swann bowled that we would be saying 'that's amazing'."

Getting an Indian legend bowled through the gate isn’t that difficult as an off spinner !!! #JustSaying #INDvENG

Former England captain Michael Vaughan joked that the wicket was similar to his dismissal of India legend Sachin Tendulkar in 2002...

Tweet
More in this category: « Daniil Medvedev wins despite coach walking out - Australian Open. Alisson at fault again as Leicester beat Liverpool. »
back to top