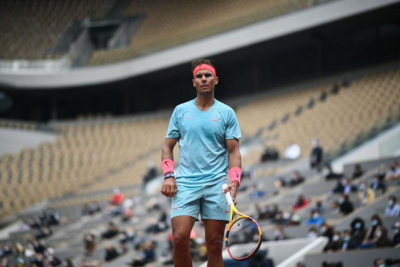 Rafael Nadal beat an impressive Cameron Norrie to reach the Australian Open fourth round and end British interest in the singles competition.

Playing on an empty Rod Laver Arena after Melbourne entered lockdown, Nadal was not at his rhythmic best but he held off a confident-looking Norrie.

Norrie claimed the first break of the match and hung in well against Nadal, but there was no stopping the Spaniard when he upped his tempo.

Nadal showed occasional hints on serve of a back problem that has bothered him since his arrival in Australia but he moved and hit freely.

"I combined very good games with a couple of unforced errors that I need to fix," Nadal said.

"That is normal and hopefully that will help me for what's coming on Monday," Nadal added.

Nadal has yet to drop a set in Melbourne despite being, by his own admission, not near his best.

Norrie played well, saving six of the 12 break points he faced, but although he would get to 0-30 on the Nadal serve he could not find a way through.

His early break was cancelled out straight away by Nadal and a tight first set ended with a long forehand from the British number three.

He was able to hang in with Nadal on the long rallies, saving break points to start the second and third set, but Nadal's extra pace, particularly on the forehand, broke through his defences.

Nadal grew frustrated at times with the odd shot drifting long, but he was able to up his quality when it mattered to win in two hours 15 minutes.

Norrie was the last Briton standing in the singles for a second Grand Slam in a row, after he reached the third round of the US Open in September.