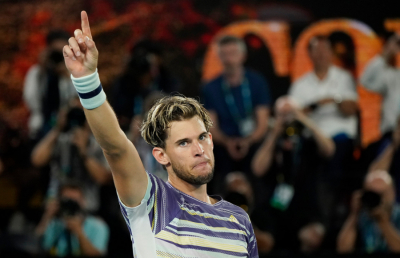 Dominic Thiem says he is "not a machine" and had "physical issues" in a shock defeat by Grigor Dimitrov in the Australian Open fourth round.

"Throughout every season you have one of those matches, you just keep the ball rolling, and today was one of those," said 18th seed Dimitrov.

He will face qualifier Aslan Karatsev, who stunned Felix Auger-Aliassime.

Thiem, last year's runner-up, did not shed any light on what the physical issues were, saying he did not "want to find any excuses".

"But the thing also is that I'm also not a machine. I mean, sometimes I would like to be, but there are really, really bad days," the third seed said.

Thiem came through a gruelling five-setter against Nick Kyrgios on Friday to reach this stage, fighting back from two sets down, but there was no such reprieve against Dimitrov on Sunday.

The Austrian looked to have taken the momentum with a break in the opening set, but Dimitrov immediately broke back and won four successive games on his way to taking the first set.

It was the same pattern in the second set, a Thiem break followed by a revival from the 29-year-old, before he motored to victory in the final set to win in just over two hours on Rod Laver Arena.

"I was entirely trying to focus on what I was doing," said Dimitrov, a former world number three. "He might have struggled with something, I don't know, but I give myself credit for staying focused."