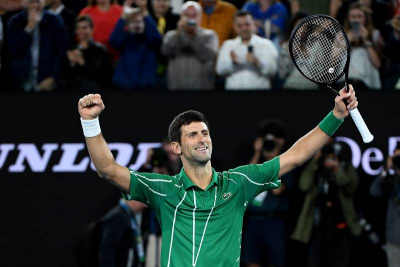 The Serb will face Russian qualifier Aslan Karatsev, who beat an injured Grigor Dimitrov, on Thursday.

Karatsev, ranked 114th in the world, is the first man in the Open era to reach the last four on his Grand Slam debut.

Few will fancy Karatsev - who has largely plied his trade on the second-tier ATP Challenger Tour - to continue his dream run by beating eight-time champion Djokovic.

The 33-year-old world number one looked far from comfortable against Zverev, a result of the German's big serving and probing groundstrokes as much as the abdominal injury which has bothered him throughout the tournament.

"Down to the very last shot, it was anybody's match," said Djokovic, who could only manage a wry smile after taking his second match point with an ace.

"Emotionally I feel a little bit drained, it was a real battle. We pushed each other to the limit."

"I was lucky to get that break in the 10th game. After that, I felt I started moving better, playing better. I served extremely well, I think I had slightly more aces than him, which for me is a miracle playing against a big server like him.

"Down to the last shot it was anyone's match. Emotionally I feel drained, honestly, it was a great battle."

Djokovic's win was also one which saw his emotions get the better of him.

Following that tightly-contested Zverev service game, Djokovic blew his top, smashing his racquet four times on the court before throwing it away as he walked to his bench.

Djokovic admitted his racquet smash might've been the trigger that shifted his performance into a "positive direction".

"Other than the second set, I started poorly in all the other three sets. I lost my service very early and I allowed him to swing through the ball," he said.

"I started to regain my focus after I broke my racquet and things started to shift for me in a positive direction."
Tweet
More in this category: « Serena Williams beats Simona Halep & will face Naomi Osaka in semi-final - Australian Open. Chiefs seeks clarity from CAF to explain decision on a Wydad Casablanca venue. »
back to top