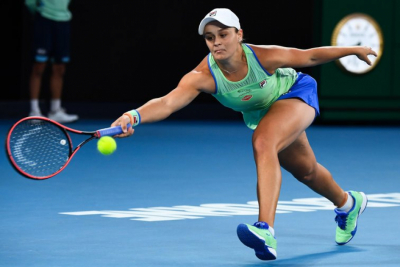 Karolina Muchova fought back to stun world number one Ashleigh Barty at the Australian Open and reach her maiden Grand Slam semi-final.

The Czech 25th seed struggled with dizziness in the Melbourne Park heat but refocused after a medical time-out to beat the home favourite 1-6 6-3 6-2.

Barty led by a set and a break but was unable to stop Muchova's comeback.

Muchova will play American Jennifer Brady, who beat compatriot Jessica Pegula, for a place in the final.

"It was very tough and I was a bit lost on the court and my head was spinning so I took a break," the Muchova said.

"It helped me. I tried to get back, played a bit faster rallies so we don't play the long ones as in the first set and it worked well."

Barty, playing in her first Grand Slam for over a year after choosing not to travel, had not dropped a set on her way to the quarter-finals.

She took advantage of the 24-year-old's wayward hitting to take the first set in 25 minutes, and broke her opponent at the first opportunity in the second.

A visibly struggling Muchova then called for the doctor, who took her off court to take her blood pressure and receive a full time-out.

On returning to the court, Muchova broke back and won five of the final six games to force a deciding set.

Barty had her opportunities in the third set, garnering two break points after losing her own serve, and a further three as Muchova served for the match.

But the world number 27 held firm to reach her first Slam semi-final.

Barty refused to blame Muchova's medical time-out as the reason for her defeat, stating: "It's not my place to comment whether she had an injury or not.

"If she wasn't within the rules, the physios and the doctors would have said so. That's the laws of our game, is that we have those medical timeouts for cases that are needed."