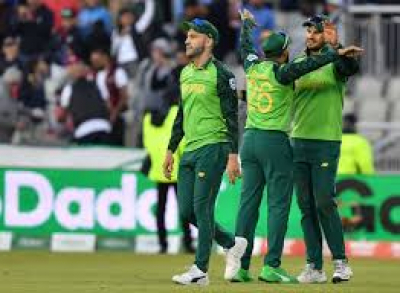 Former South Africa captain Faf du Plessis has retired from Test cricket and will focus on the Twenty20 format.

"The next two years are ICC T20 World Cup years," he said in a statement.

"Because of this, my focus is shifting to this format and I want to play as much of it as possible around the world so I can be the best player I can possibly be."

Du Plessis scored 10 Test centuries, with the first - on debut - an unbeaten 110 in almost eight hours to help South Africa secure a thrilling draw against Australia in Adelaide.

He made 199 - his Test-best score - against Sri Lanka at Centurion in December, but managed only 55 runs in four innings in the 2-0 series defeat by Pakistan that ended this month.

"My heart is clear and the time is right to walk into a new chapter," said Du Plessis, who took over as Test captain in 2016 and led South Africa in 36 Tests before standing down last year.

"If someone had told me 15 years ago that I would play 69 Test matches for South Africa and captain the side, I wouldn't have believed them.

"I stand in a place of utmost gratitude for a Test career full of blessings bestowed on me."

The T20 World Cup in India starts in October and the 2022 edition a year later in Australia.

"I strongly believe I have a lot to offer to the Proteas in this format," said Du Plessis, who has played 143 one-day internationals and 50 T20s for South Africa.

"This does not mean that ODI cricket is no longer in the plans. I'm just making T20 cricket the priority in the short term."