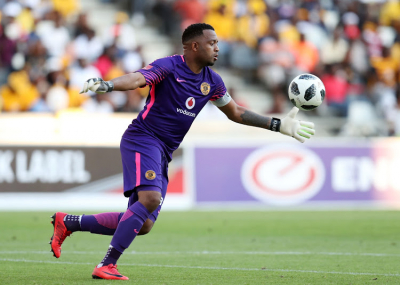 Khune returned to Chiefs starting line-up following a two-month absence since being dropped back in December following costly blunders in successive games.

The 33-year-old, however, failed to make good of the opportunity afforded to him as he once again slipped up to allow AmaZulu to walk away 2-1 victors from FNB Stadium on Wednesday evening.

He was Chiefs' undisputed holder of the gloves for almost a decade from his debut season in 2007-08. He largely carried a battling Chiefs in many games at the start of their current six-season trophyless run.

But the keeper began to suffer serious and lengthy injuries from the 2018-19 season‚ and has played a total of 23 league games in Chiefs’ last three campaigns‚ including 2020-21.

This season Khune has conceded 12 goals in his six starts in the league‚ a fair share of those from errors.  Khune dealt well with being the busier of the two keepers against Amazulu, until his costly mistake at the end.

Asked to reflect on the shortcomings of the goalkeeping department, particularly that of Khune, Hunt conceded that there are huge concerns while also suggesting that the issue goes beyond the glaring goalkeeping mistakes witnessed on the pitch.

"Ja, it's not the place nor the forum to talk, sorry to talk like that, but it's a big concern – yes – since I've been here," said the four-time league-winning coach.

"So ja, it's something we just have to keep working on and hopefully we can improve there but it's certainly... I think it's a bit more than that, that you've mentioned, but it's something that's a concern – a big concern."

Chiefs have another tough league outing on Saturday against second-placed SuperSport United at FNB.