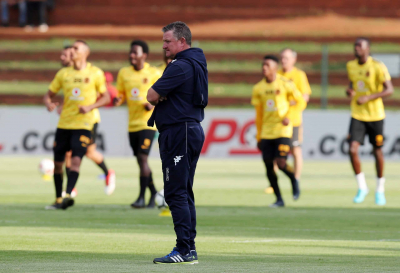 Kaizer Chiefs will be without six players for their Saturday’s league game against SuperSport United.

In a statement released on Friday, Amakhosi announced that Lebohang Lesako and Dumisani Zuma will not be available due to injuries. Chiefs will be without Siphosakhe Ntiya-Ntiya and Darrel Matsheke who are both suspended for the encounter at FNB Stadium.

Chiefs suffered a second straight defeat – and saw their winless run in the league extended to four matches – with a 2-1 home loss at the hands of in-form AmaZulu on February 17.

The Soweto giants have taken just seven points from eight home matches this season. Their only win as hosts was against top-flight newbies Tshakhuma Tsha Madzivhandila last month.

"We have a few more red cards this season already, so it is a concern, but it comes from various things, and it is not good if you look at it," said Kaizer Chiefs head coach Gavin Hunt, whose goalkeeping department has come under the microscope this week. "We also have to look at the situations. It is not good, and we know that."

"We have to try and get through this. As much as we had those five games unbeaten, we were not that great, and the games that we lost were better, and we lost."

SuperSport go into the match on the back of a 2-1 home win over Cape Town City on February 13, with Ghampani Lungu and Thamsanqa Gabuza netting for the Tshwane side. Matsatsantsa have claimed 12 points from seven away matches this season. All three of their league defeats in the 2020-21 season have been on the road.

"We played well and deserved the three points, " said SuperSport head coach Kaitano Tembo following their win over City. "Good work ethic from the boys. I'm happy because we've beaten City for the first time. They have given us problems over the years.

"We have more days to try to recover and also train to prepare for Chiefs. Games are coming thick and fast. We wanted to win the game because we were playing at home and also to reduce the gap on Sundowns."

In head-to-head stats, SuperSport and Chiefs have met in 60 league matches since 1990. Matsatsantsa have claimed 22 wins compared to 20 for the Amakhosi, while 18 games have been drawn. The Soweto side has won 12 of their 30 home matches in the rivalry, suffering 12 defeats in the process.

Meanwhile Jwaneng Galaxy are not giving up on beating Orlando Pirates ahead of Sunday’s CAF Confederation Cup play-off, second-leg at Orlando Stadium despite heavily trailing 3-0 from their home leg.

Jwaneng started in the Caf Champions League where they eliminated Zilimadjou from Comoros Islands in the preliminary round.

They then met Mamelodi Sundowns who beat them in the first round to drop to the Confederation Cup play-offs.

More in this category: « SAFA to CAF: South African clubs 'will not play at neutral venues'. All Blacks legend Dan Carter announces retirement from rugby. »
back to top