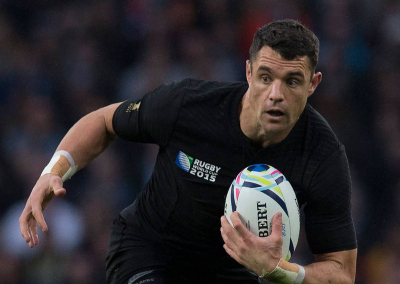 Daniel Carter, after 19 professional seasons and just a few weeks short of turning 39, has announced his retirement from all rugby.

The man many would say is the greatest No 10 to have played the game, after winning 112 test caps for the All Blacks in which time he became the most prolific points scorer in the history of rugby, says his body could push on for another few years, but his mind has checked out.

Having won Super Rugby titles, Rugby Championships, World Cups, the French Top 14, Heineken Cup and Japanese Top League, Carter felt he’d won everything he could in the game and had nothing left to prove.

He says that after a brief stint with the Blues last year – which came after he had three years in France with Racing 92 in Paris and then two-and-a-bit seasons with Kobe Steelers in Japan – he realised he no longer had the motivation to push himself as hard as he would need to be competitive in New Zealand.

And with too much uncertainty about travelling in and out of New Zealand, he lost interest late last year in playing overseas, so he decided it was time to retire and spend more time with his three children, with a fourth on the way.

At the heart of his decision was a realisation about who he really is and why he was playing. Even at 38, Carter came to see that his desire to play was driven by a need to play at his best and be part of a winning team. He couldn’t turn up just for the pay cheque, something he suspected he would be in danger of doing if he carried on playing.

"After experiencing rugby in Japan I thought I could squeeze a few more years out of my body," he says. "There was something really enjoyable about being part of that environment and the culture we had at the Kobe Steelers. I was playing rugby and enjoying it and wasn’t sure when I would stop.

I got forced back by Covid in March and was gutted about that. I was coming off contract and I guess the frustrations of not being able to finish the Japanese season and then going to the Blues for a little bit, I loved that. I loved being part of the team environment but going through that process it made me realise that I play to be the best player out on the field.

"That is my drive and it always has been and I just didn’t have that drive back here in New Zealand. I had nothing to prove and nothing to get my motivation levels up to where they should have been to play against all those young bucks here.

In an emotional Instagram post Carter said he had thought about the day he called it quits many times.

"I can’t thank everyone who has played a part in my journey enough – from my team mates, opponents, coaching and management teams, sponsors and in particular you, the fans.

A special mention to my friends and family who have supported and guided me through my career. Mum and Dad, thank you for everything you have sacrificed for me. My wife Honor for being my rock and allowing me to fulfill my dreams while raising our beautiful family – I can’t thank you enough.

More in this category: « Chiefs looking to avenge their defeat to Supersport United in the first round. Naomi Osaka wins fourth major and second Australian Open title with dominant display in Melbourne. »
back to top