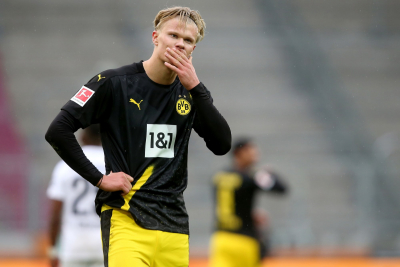 The result marks a return to form for Dortmund, who had won just one of their previous six matches in the German top flight.

Raphael Guerreiro and Haaland rounded off the scoring after the break.

However, it was an evening when Haaland once again stole the show, opening his account with a superb scissor kick from Sancho's cross.

And his second, which put the gloss on a comfortable victory, brought up his 43rd goal in 43 appearances since joining Dortmund from Red Bull Salzburg.

"We wanted to put down a marker," said Dortmund midfielder Emre Can. "Everyone knows what this game means for the fans; maybe the most important one.

"If everyone goes the extra step then we are very strong. We cannot let up now and have to show it in every game. Then hopefully we can still have a successful season."

Dortmund are sixth on 36 points, six behind Eintracht Frankfurt, who are fourth. The top four teams automatically qualify for next season's Champions League's group stage.