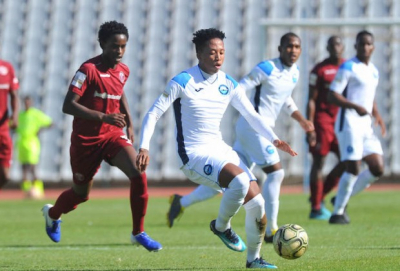 Richards Bay have opened a three-point lead at the top of the GladAfrica Championship following a full round of matches played across South Africa this weekend, while worries continue for strugglers Steenberg United, Cape Town Spurs and Bizana Pondo Chiefs.

The Natal Rich Boyz appeared to be in trouble in their Sunday afternoon provincial derby against Uthongathi FC at the Richards Bay Sports Stadium when Sinethemba Mngomezulu netted an early penalty for the visiting side.

However, Bay surged back in the second half and secured all three points thanks to a brace from Khanyiso Mayo, putting daylight between themselves and second-placed Sekhukhune United.

Sunday also saw Bizana Pondo Chiefs remain bottom of the log after a 2-1 loss at Goble Park against Free State Stars (stretching the Eastern Cape side’s away losing run to eight matches this season), while Polokwane City clicked into top gear with an emphatic 3-0 home win over Jomo Cosmos at the Old Peter Mokaba Stadium, extending their unbeaten run to five matches across all competitions.

The round opened on Friday afternoon with a goalless stalemate between Cape United and Cape Town All Stars at Parow Park Stadium, while Saturday’s headlined result was a 2-0 win for Pretoria University over Cape Town Spurs at Tuks Stadium. Mathuane Selotola and Sanele Barns netted for AmaTuks as they ended an 11-match winless run.

Saturday also saw high-flyers Sekhukhune held 1-1 by TS Sporting (with strikes from Thabang Sibanyoni and Kamohelo Sithole respectively), JDR Stars and Royal AM were goalless at Giant Stadium, and Steenberg United’s lean run extended to seven winless matches after they were beaten 1-0 by Pretoria Callies at the Idas Valley Sports Ground, with Thabiso Nkoana netting the only goal.

The GladAfrica Championship will go into a short recess to accommodate the next round of the Nedbank Cup, before resuming with a full round of fixtures on the weekend of 5-7 March.