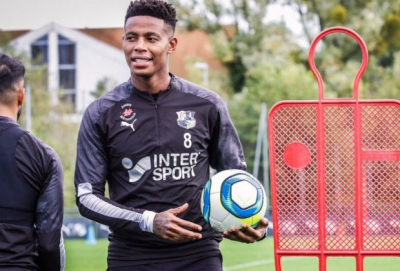 Joe Aribo netted a stunning third to kill the game, before goalkeeper Benjamin Siegrist's clearance cannoned off Alfredo Morelos and into the net.

Borna Barisic missed a penalty before Marc McNulty got a late consolation.

Rangers have now played 30 of their 38 league fixtures and lead nearest challengers Celtic by 18 points before they visit Ross County at 19:30 GMT.

As their final game before the split is an Old Firm derby, Gerrard's side could claim the title by winning their next three league fixtures.

Micky Mellon's United are a point off sixth-placed St Mirren, who have a game in hand.

The visitors carved out the first chance when Shankland was played in on the edge of the Rangers box after a fine move and went beyond his man, only for Allan McGregor to smother the shot.

United took encouragement and Nicky Clark sent Appere through, McGregor racing off his line to make the block.

Steven Gerrard went to his bench as early as the 27th minute with Glen Kamara taking over from Ryan Jack and McGregor kept his side on terms again by beating away Appere's powerful drive.

United had enjoyed the better of it, but Rangers grabbed the lead as Aribo patiently probed on the left edge of the box before Hagi's flick diverted his shot and wrong-footed Siegrist.

A second goal followed within three minutes. Barisic's cross was headed up by Leon Balogun and Kent's strike came off the unfortunate Ryan Edwards to again leave Siegrist helpless.

Two deflected goals and the tide had turned. Steven Davis volleyed wide before Siegrist denied Morelos at close range with a stunning save, the striker also unable to force in the rebound.

And Aribo got the goal of the game three minutes into the second period, playing a one-two with Morelos on the left and thundering a shot into the opposite corner.

Morelos came close with a header but did find the net somewhat unintentionally when Siegrist's panicked clearance cannoned back off him and flashed into the net.

But Siegrist redeemed himself by parrying away Barisic's spot-kick after Jeando Fuchs was penalised for a challenge on Morelos.

Defender Jack Simpson made his Rangers debut as a replacement for Filip Helander but would not be part of a clean sheet.

Substitute McNulty exchanged passes with Shankland and swept a low shot past McGregor to become the second visiting player to score a league goal at Ibrox this season.

And 16-year-old defender Kerr Smith made a late debut appearance off the bench for United.

Tweet
More in this category: « Inter hammer Milan as Lukaku, Martinez dazzle in top-of-the-table clash. Man City extend their lead at the top of the Premier League with a narrow win over Arsenal. »
back to top