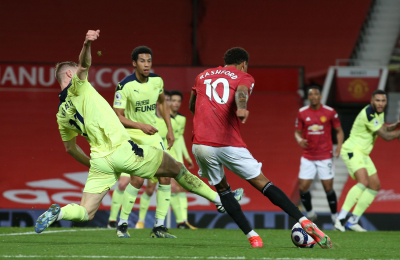 Marcus Rashford played a key role in a win over struggling Newcastle as Manchester United returned to second place in the Premier League.

The England striker helped the hosts overcome a stuttering start when he lashed in an 18th goal of the season by beating Karl Darlow at the near post after 30 minutes.

Allan Saint-Maximin then scored a deserved equaliser with his first goal since coming back from a two-month absence caused by coronavirus symptoms, slamming in after Harry Maguire failed to clear.

The Newcastle winger then threatened again early in the second half, but the game turned after 57 minutes when Daniel James re-established the lead.

That led to the visitors' confidence draining away, with Rashford then earning a penalty as he drew a foul from Joe Willock before Bruno Fernandes knocked in his 22nd goal of the season.

Defeat for Steve Bruce's side was a seventh in 10 Premier League games, leaving them three points above the drop zone - and a relegation scrap with Fulham is now set to ensue.

For Ole Gunnar Solskjaer's side, it was only a second win in six league matches, and a welcome victory after a draw at West Brom last weekend.

"We've got to be there just in case, but every game is important. Every time we get three points we've done our job and that's what we've got to do and see what other teams do," he added. "The main thing is to get the ball in the net more than the opposition, and we're doing that, but there are games where we'll have to keep clean sheets."

Solksjaer added that he will keep his side focused despite the double-digit gap that exists between United and City.

"Just keep going. You have to be relentless. The season is a strange one but you have to build on confidence. We have to recover well in between and I am sure they will because when you win games you get energy," he said.

But they remain 10 points behind leaders Manchester City, who beat Arsenal earlier on Sunday.

Meanwhile City boss Pep Guardiola says he is surprised by his side's imperious run of form "when everyone is suffering in this world" as they extended their winning run to 18 games with victory at Arsenal.

The Premier League leaders have not dropped a point since 15 December and have taken control of the title race as they sit 10 points clear at the top of the table with 13 games remaining.

Like other teams, they have had to deal with a congested fixture list as well Covid-19 cases within the club as the world continues to battle the coronavirus pandemic.

Guardiola said: "I'm surprised and impressed and so when everyone is suffering in this world, all the teams in the league are dropping points, we were consistent over the past two months and I did not expect [that].

"People talk and talk about the record and the victories but to do this you have to win these types of games many, many times.

"It is not always about winning by three or four because that is not possible."