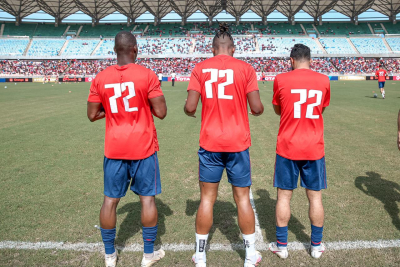 Simba SC went top of Group A in the Caf Champions League after a 1-0 win over champions Al Ahly at Benjamin Mkapa Stadium.

After a hard-fought 1-0 win away to AS Vita, the Msimbazi-based charges aimed at defeating the Red Devils who had also defeated Sudanese outfit Al Merrikh at home.

The reigning Tanzania Mainland League champions started the game better, denying the Egyptians possession. Their confidence levels were good and the presence of the fans made it even easier.

In the 31st minute, the home-team supporters were given something to celebrate. Mozambican Miquissone was let loose in the 18-yard area and he unleashed an unstoppable rocket that hit the crossbar before bouncing in the net.

Meanwhile AS Vita bounced back from their loss to Simba by defeating Al Merrikh 4-1.

It was the hosts who scored first courtesy of Elsamani Saadeldin in the eighth minute. Obed Mukokiani replied 20 minutes later before Djuma Shabani made it 2-1 in the 37th minute from the penalty spot.

The third goal was scored by Amede Masasi in the 68th minute before Mukokiani completed his brace with seven minutes to go.

Tweet
More in this category: « Sunshine Tour success gives Ritchie and Van Tonder shot at world's best. Leopards broke their five-match losing streak with a win over Arrows. »
back to top