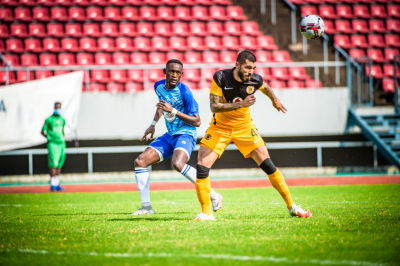 Chiefs were looking to start their group stage campaign with a victory and also snap their six-match winless run across all competitions in the process.

Kearyn Baccus replaced Njabulo Blom in the starting line-up as coach Gavin Hunt made one change to the team which faced and draw 0-0 with SuperSport United in a PSL game over the weekend.

Chiefs got off to a bright start as they pressed Horoya - searching for an early goal that would have unsettled the visitors' defence which was led by Ibrahima Doumbouya.

The hosts were wasteful as Nkosingiphile Ngcobo, Samir Nurkovic and Willard Katsande failed to take their chances inside the first 15 minutes of the encounter.

Horoya finished the first-half the stronger of the two teams with Enock Agyei tormenting the Chiefs defence with his blistering speed and sharp movement.

The score was 0-0 during the half-time break with Chiefs having failed to take their chances.

Soweto giants controlled the match after the restart and Nurkovic thought he had broken the deadlock when he beat Horoya keeper Moussa Camara with a tap in, but he was ruled offside.

Chiefs continued to launch attacks in the latter stages of the game with Leonardo Castro's long-range shot being tipped over the crossbar by Camara and Siyabonga Ngezana headed the ball inches wide of the target.

Meanwhile, Guinea’s Horoya have started their campaign and beat Angolan side Petro de Luanda 2-0 at home in their opener.

The result left Chiefs placed third on the Group C standings - three points behind leaders, Horoya, but the Soweto giants have a game in hand and they will face Morocco's Wydad Casablanca on Sunday.

More in this category: « Leopards broke their five-match losing streak with a win over Arrows. Tiger Woods in hospital after car crash, says LA County Sheriff's Department. »
back to top