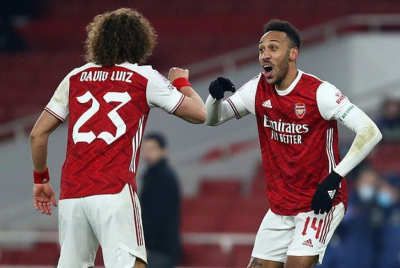 Arsenal produced another fightback as three goals in 17 minutes either side of half-time gave them a 3-1 victory at Leicester to prevent the Foxes moving second.

Having gone out of the Europa League on Thursday, the Foxes were given an early tonic by the Gunners as Youri Tielemens was allowed to run unchecked down the right before firing a low shot into the far corner with just six minutes played.

Arsenal refused to be adversely affected, though, and took control of the game with impressive attacking intent and far greater fluency than the hosts.

David Luiz brought them level, finding space in the box to steer a header in from Willian's free-kick.

Alexandre Lacazette then put them ahead after the video assistant referee (VAR) judged that Wilfred Ndidi had blocked Nicolas Pepe's shot in the box with an outstretched arm.

It was second time lucky for the Gunners, who had earlier had a penalty awarded on the pitch but then downgraded to a free-kick after VAR decided the offending tackle on Pepe had taken place just outside the area.

Ivory Coast forward Pepe got in on the act himself, tapping into a largely unguarded net after Willian's pass had deflected his way.

Arsenal boss Mikel Arteta actually chose to rest a number of key players on Sunday, including Bukayo Saka and Pierre-Emerick Aubameyang, whose late winner had won their Europa League tie against Benfica on Thursday.

However, it came at a potential cost, though, with Emile Smith Rowe - such a bright spark in recent months - having to leave the field injured in the first half.

Leicester suffered a big injury blow of their own, influential winger Harvey Barnes having to be carried off on a stretcher with his leg in a brace after pulling up during a sprint.

The Foxes' sixth home loss of the campaign leaves them 10 points behind a Manchester City side who have won their past 20 games.

Arsenal move up to ninth, eight points off the top four but with a renewed interest in events above them in the table.

Meanwhile Fulham missed the chance to move within a point of fellow Premier League strugglers Newcastle and Brighton after being held to a goalless draw at Crystal Palace.

The draw lifts Scott Parker's Cottagers to 23 points - three behind 17th-placed Newcastle - while the Eagles are 10 points above the relegation zone in 13th.