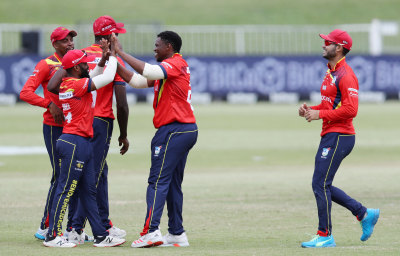 The Imperial Lions delivered a brilliant display to beat the Dolphins by four wickets in Durban on Sunday to win the CSA T20 Challenge.

Keshav Maharaj had won the toss and immediately decided to bat first but a wonderful bowling display from bowler of the match, Kagiso Rabada (3-12) restricted the Dolphins to just 107 for seven in their 20 overs.

In reply, the Lions were cruising on 61 for one with Reeza Hendricks (39) and Temba Bavuma (22) going strong but then the wheels started to come off.

Robbie Frylinck (4-0-16-1) had Bavuma caught at mid-on by David Miller when the Lions captain top-edged a pull shot.

Ottniel Baartman (4-0-20-2) then started the nerves twitching as he had the big fish of Rassie van der Dussen edging behind to Mangaliso Mosehle for just three.

Kerwin Mungroo got a ball to bounce a little more and had Hendricks edging to Mosehle before Prenelan Subrayen (4-0-34-1) clean-bowled Rabada (1), who had been sent in to try some lusty blows.

The Dolphins took the game as deep as they could, defending just 107, including grabbing the wicket of Delano Potgieter (9), caught on the square-leg fence by Ruan de Swardt with four runs left to score.

But batsman of the match Wiaan Mulder managed the ending with an unbeaten 24 from 23 balls while Bjorn Fortuin (4 not out) came in and slapped the winning runs off Baartman.

The Lions finished on 108 for six from 19 overs after Hendricks had cracked two fours and two sixes from 40 balls while sharing in an opening stand of 25 with Ryan Rickelton (3) and 36 for the second wicket with Bavuma.

However, the win was set up by Rabada, who led an excellent bowling display from the double-champions as they reduced the Dolphins to 20 for three at the end of the power play.

Fortuin (4-1-19-1) dismissed Sarel Erwee with the third ball of the innings without scoring before Beuran Hendricks (4-0-29-1) had De Swardt caught by Rabada at mid-on for just two.

With Miller walking out to the crease, Bavuma turned to Rabada and the trick worked as he had Miller caught by his captain at mid-off from a leading edge.

Khaya Zondo (24) and Mosehle (18) tried to restore order but Rabada ripped through Mosehle's stumps before Sisanda Magala (4-0-19-2) had Zondo caught by Rabada running back from mid-on.

Frylinck tried his best to keep the scoring ticking and lifted his side past the 100-run mark with an unbeaten 30 from 26 balls, an innings that included just one six – which came off the final ball of the innings.

More in this category: « Inter Milan thump Genoa to extend Serie A lead. Wydad Casablanca outclass Kaizer Chiefs in Ouagadougou. »
back to top