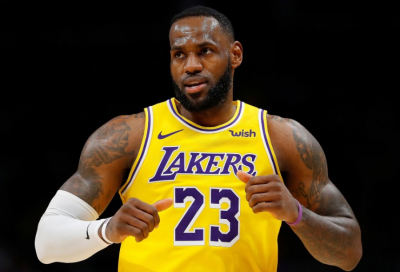 LeBron James marked his 1,300th NBA regular-season game by helping the Los Angeles Lakers to a 117-91 victory over the Golden State Warriors.

James, who has won championships with three franchises, had 19 points plus six rebounds, four assists, two steals and two blocked shots in 24 minutes.

He sat out all of the fourth quarter along with the rest of the starters from both teams as the Lakers closed out a dominant victory.

It avenged a narrow loss in January.

The Lakers are still without star forward Anthony Davis but have now won two in a row after a run of five defeats in six games.

"When you lose a mega-piece like AD, it's going to take some time both offensively and defensively," said James

He added that the Lakers were becoming more comfortable in the roles they have had to adopt with Davis sidelined, an absence that Lakers coach Frank Vogel said called on them to develop a "little bit of a new identity".

Stephen Curry was limited to 16 points for the Warriors and they also suffered the loss of Draymond Green with a sprained left ankle in the second quarter.

Elsewhere, Boston Celtics forward Jayson Tatum scored two baskets in the final 15 seconds to lead his side to a dramatic 111-110 victory over the Washington Wizards.

Tatum scored 31 points and the Celtics withstood a 46-point performance from Washington's Bradley Beal to complete their first back-to-back wins since January.

There was also late drama in Sacramento where the Charlotte Hornets trailed by nine with two minutes 19 seconds remaining but battled back to beat the Kings 127-126 thanks to a late three-point play from Malik Monk.

And Giannis Antetokounmpo scored 17 of the Milwaukee Bucks' last 22 points in a 105-100 victory over the Los Angeles Clippers.

More in this category: « Liverpool gain ground on top four with a win at Sheffield United. Atletico Madrid increase La Liga lead with victory at Villarreal. »
back to top