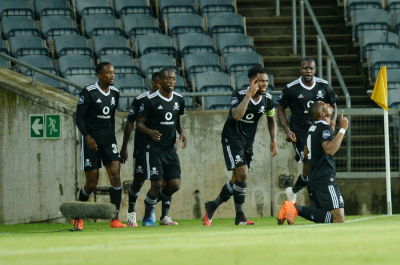 Orlando Pirates climbed to third spot in the DStv Premiership standings with a 1-0 win over Bloemfontein Celtic on Tuesday evening.

Fortune Makaringe netted the only goal of the game as the Buccaneers claimed an eighth league win of the campaign, leapfrogged to third place and moved to within four points of leaders Mamelodi Sundowns – having now played three more matches than the champions.

Celtics had captain Ndumiso Mabena sent off late in the first half and suffered an eighth loss, leaving them in 11th place and two points adrift of the top half of the table.

A promising passing move on the edge of the area minutes to the half-hour mark from the Buccaneers almost led to the opener, but Kabelo Dlamini dragged wide of the bottom-corner.

The first half ended with the teams level at 0-0, but Celtic suffered a major blow just before the interval when former Pirates man Mabena was deservedly shown a straight red card for a studs-up challenge on Linda Mntambo.

Phunya Sele Sele introduced Harris Tchilimbou at the beginning of the second stanza, as they reshuffled with their 10 men, while Pirates threatened within 90 seconds of the restart as Vincent Pule drove a low effort just wide of Jackson Mabokgwane’s right-hand post.

Despite being down to 10 men, on 50 minutes Celtic created the best chance of the game to that point when Victor Letsoalo mugged Thulani Hlatshwayo to have a sight of goal from a tight angle, but Richard Ofori made a fine save with his legs.

Pirates finally broke the deadlock two minutes after the hour mark, with Makaringe moving into space in a central area just outside the 'D' of the box before firing a low, long-range effort into the bottom corner of the net for 1-0.

The win saw Usuthu remain sixth on the league standings, but they are two points behind fourth-placed Swallows FC, while Matsatsantsa remained second on the log.

Elsewhere TS Galaxy became the first team to defeat Swallows FC in the DStv Premiership this term when they secured a 2-1 win at the Mbombela Stadium and Maritzburg United claimed a vital win in their battle against relegation from the DStv Premiership, defeating fellow strugglers Black Leopards 1-0 at the Harry Gwala Stadium.

More in this category: « Kruger's comeback starts with a memory as Sunshine Tour tees off. Chiefs ban Itumeleng Khune from 'excessive' social media – Report. »
back to top