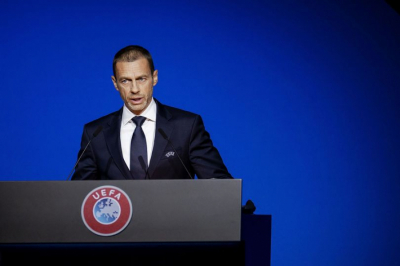 Glasgow and Dublin are at growing risk of being cut from the list of hosts for this summer's European Championship.

With fewer than 100 days until the delayed Euros, Uefa wants each of the countries staging matches to submit their plans - including for the return of fans - by a deadline of 7 April.

Organisers say they still hope to stage matches at the 12 venues as planned.

But the Scottish and Irish governments are yet to provide assurances whether fans will be allowed back by June.

And Uefa is understood to be increasingly concerned they may have to strip Glasgow and Dublin of their matches.

Both Hampden Park and the Aviva Stadium are due to stage four games.

According to one source with knowledge of tournament planning, the position on fans in Dublin and Glasgow is currently "very bad", with the respective governments "taking a much tighter approach to Covid than other cities".

On Wednesday, Scotland's Health Secretary Jeane Freeman said that being part of the Euros was "a really big deal" for her country.

But she added that fans being able to attend depended on "all of us abiding by the rules", cases falling, and the take-up of vaccines.

"We certainly should be able to celebrate our national team playing in the Euros, hopefully winning in the Euros, and we'll see whether or not it's possible at any point along that road for fans to actually be present to witness that," she said.

It is understood that the next few days will be crucial and that the Scottish government is aware of the need for clarity.

The Euros will be Scotland's first major tournament for 23 years.

Last week, the Football Association of Ireland said it was still planning for fans to be present at Dublin's Aviva Stadium at the Euros, but admitted that it would only remain a host venue if it could guarantee Uefa that spectators would be permitted.

Irish government restrictions on spectators will remain in place until at least 5 April.

The British government has said up to 10,000 spectators will be permitted inside English grounds from mid-May, and unlimited numbers from 21 June.

Earlier this week, Prime Minister Boris Johnson said England could stage more than the seven matches currently being played at Wembley, if Uefa needed it to step in.

The Football Association are understood to be willing in principle to stage additional matches in England if asked to do so by Uefa, but sources suggest there has been no such request to date.

More in this category: « Khune, Zungu included in Bafana Bafana squad for crucial AFCON qualifiers. Packed 2021 season on the cards for SA Athletes. »
back to top