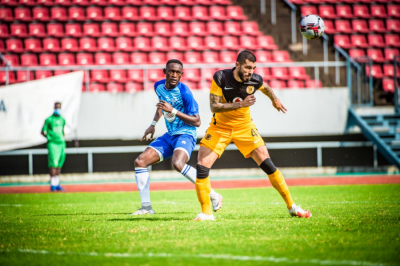 Kaizer Chiefs will be aiming to return to winning ways when they host Petro Atletico in a 2020-21 Caf Champions League match at FNB Stadium on Saturday.

Chiefs slumped to a humiliating 4-0 loss away to Wydad Casablanca at Stade du 4 Août in neutral Ouagadougou on Sunday, to remain winless after two rounds of group C fixtures.

"Obviously the scoreline doesn't look good, it doesn't look good‚ but I thought we had a couple of good opportunities ourselves, you know but obviously we got caught on two back post goals‚ the first two goals," said Chiefs head coach Gavin Hunt following their defeat in Burkina Faso.

"So we kept going but obviously at the end‚ we got [conceded] two [goals] right at the end. But I thought in the second half we got stronger‚ we got better and we had opportunities and tried to play‚ but obviously it wasn't to be."

Petro Atletico are also winless after two matches, following defeats to Horoya (2-0) and Wydad (1-0) in Conakry and Luanda respectively.

Chiefs will be without Ramahlwe Mphahlele and Itumeleng Khune for the match. Mphahlele is suspended following his sending off against Wydad while Khune will miss the game due to a family bereavement.

Meanwhile Wydad Casablanca will square off with Horoya AC in the CAF Champions League Group C match at the Stade Mohamed V in Casablanca, Morocco on Saturday.

The Moroccan giants have had a good start to their group stage campaign having recorded their second win in a row when they thumped South Africa's Kaizer Chiefs 4-0 at home on February 28.

The win saw Wydad extend their lead to two points at the top of the Group C standings having also defeated Angolan side Petro de Luanda in their first game.

Elsewhere Mamelodi Sundowns will look to continue their dominance of Group B in the CAF Champions League when they face TP Mazembe in Lubumbashi on Saturday.

Sundowns are sitting pretty at the top of the log after racking up back-to-back wins in their first two matches of the group stage.

The South African side first took down Sudan’s Al Hilal 2-0 at home, before turning on the style with a 5-1 away win over Algeria’s CR Belouizdad this past Sunday.