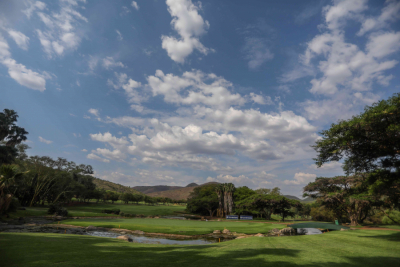 Dean Burmester and Ockie Strydom shared the lead with their rounds of seven-under-par 65 in the first round of the Kit Kat Group Pro-Am at Royal Johannesburg and Kensington's East Course on Friday.

They finished a weather-interrupted day one stroke clear of the South African duo of Malcolm Mitchell and Jake Redman, and Welshman Rhys Enoch.

The first tournament of the Sunshine Tour's 2021 calendar has drawn a strong contingent of young stars including Garrick Higgo, who is two shots off the lead. Jayden Schaper opened with a round of four under 68 and Wilco Nienaber signed for a 69.

Burmester, playing the back nine first, started strong with birdies at holes 10 and 11 which are amongst the longest back-to-back par fours in golf.

"A birdie-birdie start is always nice, especially on those two holes. That definitely boosted the confidence," he said. "Those are not the easiest par fours out there. For many years they were the longest back-to-back par fours in the southern hemisphere. You need good tee shots on both."

He capped off his round with an equally strong finish of three birdies in the final four holes.

"When it comes to the front nine here you always feel like you want to take advantage because you have three par fives there. I didn't birdied the par-five first, so it was nice to get the other two."

While it was a bogey-free start for Burmester, he still feels there's room for improvement.

"There's always work to be done. I didn't hit too many fairways, but when I missed I was on the right side so I was able to keep giving myself chances. But it's just so good to be back playing on the Sunshine Tour again, and back at Royal Johannesburg and Kensington as well."

Strydom, who played his first full round of golf last week after recovering from a back injury, had a more adventurous start with two birdies, two bogeys and an eagle in his opening six holes. His short game came to the fore with that eagle on the par-five sixth where he holed a lob wedge from a difficult downhill lie at the back of the green. Then he finished his round with three straight birdies.

"This is not an easy course. You've really got to keep your head around here, so seven under is a good round for me," he said.

"I'm in a good space with my game. As I've recovered from my back injury I've been working a lot more on my swing technique with my coach, and it's starting to show in the ball flight. I have a lot more confidence in terms of my swing and knowing exactly where the ball will go."

More in this category: « Mr Price Sport to dress Team SA for Tokyo Olympics and Paralympics. FC Bayern München vs. Borussia Dortmund face off in Der Klassiker. »
back to top