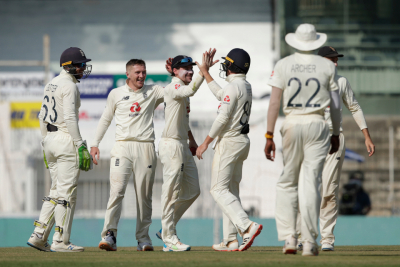 England's series defeat in India was sealed with one final, abject batting collapse on the third day of the fourth Test in Ahmedabad.

Dan Lawrence showed composure in his 50, but England were eventually bowled out for 125 to lose by an innings and 25 runs.

Axar Patel claimed 5-48 - his fourth five-wicket haul of the series - and Ravichandran Ashwin 5-47 as England lost all 10 wickets in an innings to spin for the third successive Test.

The home side had earlier extended their first innings from 294-7 to 365, Washington Sundar stranded on 96 not out when the last three wickets fell for no runs in five deliveries.

In taking the series 3-1, India earn a place in the World Test Championship final, booking a meeting with New Zealand in June. England finish fourth in the table.

The first of five Twenty20 internationals between these two sides is on Friday, with that series followed by three one-day internationals.