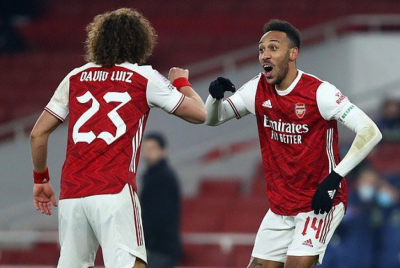 Arsenal lost further ground in their bid to qualify for the Champions League with an eventful 1-1 draw against Burnley in the Premier League on Saturday.

After Xhaka's errant pass struck Chris Wood for a bizarre equaliser to cancel out Pierre-Emerick Aubameyang's opener, Arsenal piled on relentless pressure in the closing stages.

The Gunners thought they had been awarded a penalty against Erik Pieters but the spot-kick and the defender's red card for deliberate handball were overturned by VAR after replays showed he had diverted Nicolas Pepe's shot onto the bar with his shoulder.

That was not the end of the late drama as Ben Mee's block denied Aubameyang a sure-fire winner in stoppage time before Calum Chambers crashed an effort against the post in his first league start for 14 months.

Ultimately, however, the blame for the dropped points will be laid at the door of Xhaka, who was sent off in the Gunners' December defeat by Burnley and had another day to forget against the Clarets.

Receiving a short pass facing his own goal from keeper Bernd Leno, he tried to clip a square ball to David Luiz across the penalty area but succeeded only in hitting Wood in the midriff and the ball bounced into an empty net for the softest of levellers.

Buoyed by the unexpected gift, Burnley controlled a scrappy second half before Arsenal's late siege but Leno first produced a fine save to keep out Erik Pieters' dipping 30-yard volley, and then used his leg to deny Wood in a one-on-one.

In a dramatic finale, Burnley survived two calls for penalties and Arsenal hit the post through Dani Ceballos as the home side clung on.

Burnley manager Sean Dyche said the VAR decision was an example of the value of the system.

"That is what VAR is for, those exact moments. That is when it [VAR] is worth its weight in gold because it clearly hits him on the shoulder," he said.

"The only thing I would say about the referee is that he couldn't wait to get the red card and I don't know why that is. Just take a moment and absorb it and then make a decision, in my opinion."

More in this category: « England fall apart again as spinners wrap up innings win and series for India. Livestream: Kaizer Chiefs vs Petro Atletico CAF Champions League. »
back to top