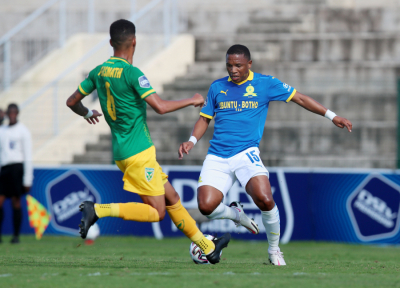 Just when it seemed that hosts Mazembe had done enough to secure a share of the spoils, Sundowns' lethal dead-ball specialist Lyle Lakay stepped up to score from a free-kick that dipped in just below the crossbar.

The Brazillians were under pressure in the early stages as shot-stopper Denis Onyango was called into action in the eighth minute to save Moustapha Kouyate's close range shot after a headed pass by Chico Kubanza.

Shalulile finally broke the deadlock for the Brazilians in the 67th minute with a strike from close range after latching onto a through ball by Zwane.

Mazembe staged a fightback, but Onyango held on to a stinging low drive from Issama Mpeko to keep his side's lead intact. Shortly afterwards, he went down after a collision, but he recovered after receiving treatment.

Tresor Mputu levelled matters for the Congelese side in the last eight minutes with a close-range finish after he was teed up by Joseph Ochaya.

But Sundowns regained the lead when defender Lyle Lakay produced one of his trademark free-kicks which stunned the opposition on the stroke of regulation time.

The Brazilians picked up a full three points from the match move to nine points at the halfway mark of the group stages and all-but secure their spot in the quarter-finals.

TP Mazembe, Al-Hilal and CR Belouizdad are all on two points.