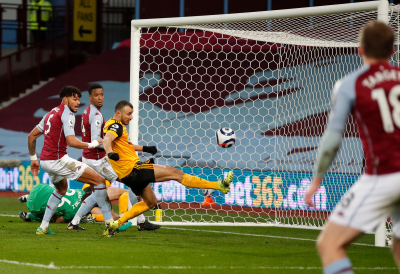 Aston Villa's European hopes suffered another setback as they were held to a goalless draw by Wolves in their West Midlands derby.

The hosts, who suffered a surprise loss to Sheffield United in midweek, dominated the early stages with Ollie Watkins and Ezri Konsa both hitting the crossbar.

But with the influential Jack Grealish again missing as he recovers from injury, Villa faded after the break as Wolves sparked into life.

However, the visitors missed several gilt-edged chances to snatch all three points with Romain Saiss blazing an effort over the bar from practically on the goal-line after Conor Coady had headed against a post.

And another close-range effort from Coady drew a superb save from Villa goalkeeper Emiliano Martinez to ensure the spoils were shared.

Adams rifled a half-volley into the top corner four minutes into the second half, ending a run of 16 games without a goal in all competitions.

Takumi Minamino should have added a third for Southampton when he fired wide from Ryan Bertrand's low cross, while Adams, Nathan Redmond and Stuart Armstrong all went close late on.

The Blades had opportunities of their own but only tested Fraser Forster twice throughout the 90 minutes.

The win lifts Saints 10 points clear of the relegation zone, while Chris Wilder's side remain rooted to the foot of the table - 12 points from safety.