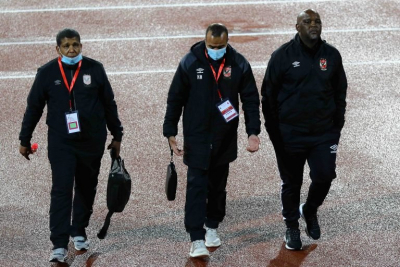 Al Ahly were held to a 2-2 home draw by DR Congo’s AS Vita Club in the third round of the CAF Champions League group-stages.

Following the defeat to Simba in the second round, the Reds entered the clash sitting third in Group A, just behind AS Vita Club on goal difference.

Pitso Mosimane’s men needed to collect a minimum of seven points from their next four games in order to have a strong chance of reaching the knockout rounds.

However, they started on the wrong foot with a 2-2 draw in Cairo against AS Vita Club, a game which could have been won easily by the Reds.

More than 15 real chances for the hosts started in the 13th minute when Mohamed Magdy Afsha headed in Ayman Ashraf’s low cross, but it was saved brilliantly by Simon Omossola.

Two minutes later, Afsha once again came so close, but his shot went inches wide, before Walter Bwalya’s header whistled over the bar.

In the 32nd minute, the Reds’ hard luck continued after Amr El-Sulya saw his shot cleared off the line, before Bwalya hit the post from inside the six yard box.

A couple of minutes later, El-Shahat went through on goal, but once again Simon Omossola was the hero for his side.

Against the run of play, Glody Makabi punished the hosts after dribbling past Ayman Ashraf and striking a powerful shot. The initial strike was saved by El-Shennawy and the rebound was turned in by Makabi.

Al Ahly continued their dominance in the second-half and in the 50th minute Walter Bwalya found himself through on goal, but his shot went way over the bar.

Mosimane had enough with Bwalya and brought him off for Mohamed Sherif, and the latter repaid the faith shown in him by equalizing in the 69th minute, after Ajayi’s initial shot hit the post.

Just one minute later and with his first touch of the game, Marwan Mohsen made it 2-1 after turning in Mohamed Magdy Afsha’s smart cross with a style.

With many thinking that surely the Reds have now secured the three points, the referee awarded the visitors a controversial penalty in the 79th minute, which was converted by Ricky Tulengi.

Following the equaliser, Al Ahly could still scored the winning goal, but luck stood by Vita Club, who went back home with a valuable point.

Ahead of the return-legs, Al Ahly currently sit third with four points, just behind second-placed Vita Club on goal difference and three behind leaders Simba, while El-Merrikh are bottom with just one point.

Speaking after the game, Pitso said: "My comments on the match? Drama.

"I have never seen a match like this in my life. It is difficult for me to fully understand the result. It is frustrating.

"How many chances we need to win a match? I do not know. It is sad, but what happened is reality.

"We have no choice but to beat Vita Club in DR Congo. We put ourselves in this difficult position. I believe in my team, and it does not matter how we started the important thing how to finish the group.

"I will not lose hope in my players, who won the CAF Champions League. We have to go to Vita Club and win."

One of the journalists has then angered Moismane after asking him the reason for subbing off Walter Bwalya, which led Pitso to reply to him: "Are you really asking me why did you sub off Bwalya today ?! Are you asking this question to create problems? Bwalya wasted opportunities and that is why he was brought off and Sherif entered and scored. You are unfair in your question.

Their next game will see them travel to face Vita Club in DR Congo on Tuesday, March 16; however, they will first play against rivals Ismaily on Wednesday March 10.

More in this category: « Black Caps thrash Australia in series decider - New Zealand vs. Australia. Rangers are champions for first time since 2011 after Celtic drop points. »
back to top