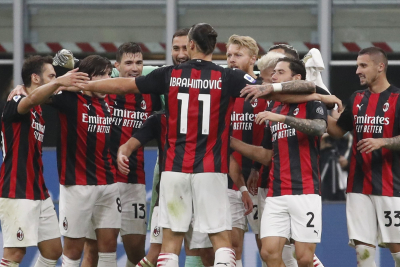 AC Milan moved within touching distance of Serie A leaders Inter Milan with a comfortable victory at Verona.

Despite being without injured top scorer Zlatan Ibrahimovic, it appeared to be a welcome return to form for Milan, who have faltered of late.

Antonio Conte's Inter team could regain a six-point lead at the top of the table if they win their home game in hand against Atalanta on Monday (19:45 GMT).

Milan, who had arrived in Verona with just one win from their four previous Serie A fixtures, led the table from October until midway through February and are chasing their first Scudetto for a decade.

With Cristiano Ronaldo starting on the bench, Joaquin Correa had given the visitors an early lead.

However, Adrien Rabiot's superb effort levelled and Morata then scored his first of the night with a composed finish.

The Spaniard rounded off the scoring with a penalty after Aaron Ramsey was fouled by Sergej Milinkovic-Savic.

Andrea Pirlo's side sit third in the Italian top flight, a point behind second-placed AC Milan and seven adrift of Inter.

More in this category: « Luke Shaw seals victory for United while Liverpool's miserable Anfield run continues. Sekhukhune, Royal AM reduce Richards Bay's lead at the top. »
back to top