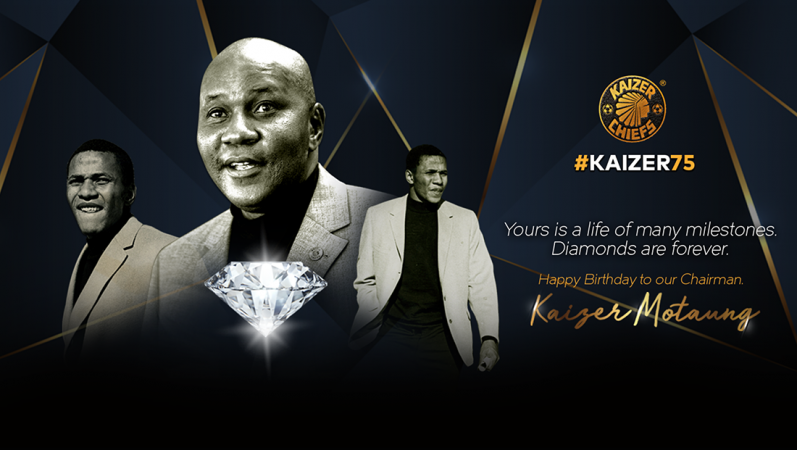 The day is special to millions of Amakhosi supporters all over the world as they get a chance to celebrate the man behind an institution that is Kaizer Chiefs.

He is the fifth child and first son of parents Ceyland and Mapontso Motaung. His parents had 9 children.

Later, they moved from Orlando East to Phefeni, still in Soweto, where many memories were made. Phefeni remains a special home to the Motaung family and Kaizer Chiefs.

Like many kids in the townships, he started playing football from a young age. He was a star player in high school and caught the eyes of scouts. At age sixteen, he was recruited to join Orlando Pirates juniors. He didn’t play long for the juniors as he was promoted to the senior team.

‘Bra K’, as he is affectionately known, impressed scouts and moved to Zambia for a trial before joining Atlanta Chiefs in the United States of America.

He played against greats such as Pelé who was playing for Brazilian side Santos.

In 1969, he turned down $1 million to remain in the States to realise his dream of forming his own club.

He started Kaizer’s XI and they played their first game on 20 September 1969.

As a 24-year-old player, he went on to officially form Kaizer Chiefs on 7 January 1970.

Bra K is celebrated by many all over the world and his contribution to football in South Africa cannot be matched.

Tweet
More in this category: « Springboks full-back Willie Le Roux says team-mates Cheslin Kolbe and Makazole Mapimpi are a match for the hosts' pacey wingers. David de Gea and Paul Pogba have been ruled out of Manchester United's clash with Liverpool. »
back to top