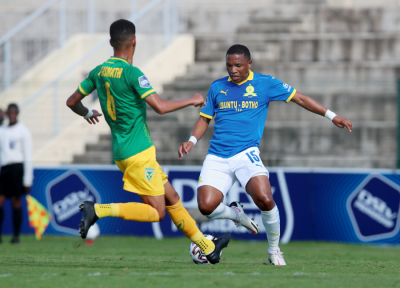 Defending Nedbank Cup champions Mamelodi Sundowns progressed to the quarter-finals with a 4-0 victory over Polokwane City at Loftus Versfeld Stadium on Wednesday afternoon.

Peter Shalulile, Lebohang Maboe, Lesedi Kapinga and Andile Jali found the back of the net in the opening half hour as the Brazilians avoided a potential banana skin, to book a quarterfinal showdown against top-flight rivals Orlando Pirates.

Sundowns opened their account with 10 minutes on the clock as Shalulile continued his scoring streak. Tebatso Phoku could only succeed in palming Haashim Domingo's initial effort into the Namibia international's path and he doesn't need a second invitation to find the back of the net.

Rise and Shine were then guilty of coughing up possession in a dangerous area and after drawing his man, Kermit Erasmus teed up Maboe who had the beating of the goalkeeper in the 14th minute.

Sundowns made it three a few seconds later as straight from the ensuing kick-off they won the ball back and raced up-field and after Phoku denied Shalulile, Kapinga pounced on the rebound and simply passed the ball into an empty net.

Polokwane finally conjured a chance of their own in the 20th minute but with the goal at his mercy, Khuda Myaba could only succeed in dragging his attempt wide of goal and having failed to take their chance to get back into the match, Sundowns made it four.

The Brazilians were awarded a penalty following a reckless challenge on Kapinga and Jali made no mistake from the spot.

Victory extended Sundowns' unbeaten run in all competitions to 23 matches.

Meanwhile the Premier Soccer League (PSL) has confirmed the dates, venues and kick-off times for the #NedbankCup2021 quarterfinal fixtures.

On Sunday afternoon, the spotlight will be on GladAfrica Championship sides Cape Town All Stars and Pretoria Callies when they lock horns at the Danie Craven Stadium in the Western Cape. Kick-off is at 15h00. Both sides will be aiming to reach the Nedbank Cup semifinals for the first time in history.

Then on Sunday evening, the Vhembe derby between Black Leopards and Tshakhuma Tsha Madzivhandila will take centre stage when the two sides clash at the Thohoyandou Stadium in Limpopo. Kick-off is at 18h00.

Due to changes in continental football match logistics, the last quarterfinal match (Mamelodi Sundowns v Orlando Pirates) will only be played on Thursday, 15 April 2021. Kick-off is at 18h00.

More in this category: « The boy from Brazil who chased his Sunshine Tour dream. Chiefs score late goal to salvage point while TS Galaxy maintain their form. »
back to top