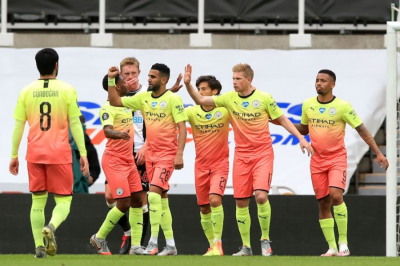 Manchester City were back to winning ways in the Premier League with a 5-2 victory over Southampton at the Etihad Stadium on Wednesday.

Riyad Mahrez and Kevin de Bruyne both scored twice as City delivered an emphatic and instant response to their defeat in Sunday's Manchester derby, which had ended a 21-game winning run.

This was not the disciplined display typical of many of City's victories this season but their incisive attacking, aided by some helter-skelter Saints defending, meant they still ended up convincing winners.

A strong Southampton start counted for nothing when Ryan Bertrand switched off and, from Oleksandr Zinchenko's cross, De Bruyne swept home from close range after Alex McCarthy had kept out Phil Foden's initial effort.

Saints, who had conceded nine goals at Old Trafford on their previous visit to Manchester at the start of February, quickly hit back through James Ward-Prowse's spot-kick after Aymeric Laporte fouled Jannik Vestergaard from a corner.

At that stage it appeared City would not have things all their own way, especially when they were denied what appeared a clear penalty when McCarthy challenged Foden after mis-controlling a back-pass.

Foden seemed to pay the price for trying to stay on his feet as McCarthy lunged in - referee Jon Moss felt the Saints keeper got a touch on the ball, with VAR apparently not seeing anything to disprove that, although the City bench and players clearly felt otherwise.

In the end that decision did not affect the outcome, with Mahrez taking centre stage to put the home side in control before half-time.

The Algerian international restored City's lead with a fine finish after intercepting a wayward crossfield pass from Che Adams and although the post denied him a second goal moments later, Ilkay Gundogan was on hand to follow up.

Mahrez picked up where he left off after the break, meeting a Foden pass to turn inside a crowded area and fire home City's fourth.

Ward-Prowse briefly reduced the deficit after a defensive mistake but Southampton were guilty of far more lapses at the back and De Bruyne punished them when he burst clear from another Foden through-ball to complete the scoring.

With nine league games to go, City know six more wins will make them mathematically sure of their third title in four seasons.

The victory means City extend their lead over United to 14 points at the top of the Premier League, though having played a game more, while Southampton stay 14th.

More in this category: « Rory McIlroy says Tiger Woods is 'doing better' after car crash. Liverpool reach quarter-finals while Barca bow out of Champions League. »
back to top