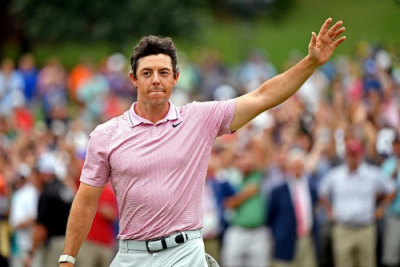 Rory McIlroy made an error-strewn start to the defence of his title at the Players Championship as he slumped to a seven-over 79 at TPC Sawgrass.

The Northern Irishman's opening round included a quadruple-bogey eight after finding the water twice at the 18th.

Open champion Shane Lowry and England's Matt Fitzpatrick are four under, with Lee Westwood in a group one shot back.

US PGA Championship winner Collin Morikawa is two shots further back on one under, while another one of the late starters, reigning Masters champion and world number one Dustin Johnson, could only card a one-over round of 73.

World number two Jon Rahm was three over after five holes but four birdies on the back nine helped him finish level par.

Sawgrass is famed for its island green on the par-three 17th and 35 balls were hit into the water on Thursday - the single round record is 50 - before darkness ended play with several players still out on the course.

South Korea's An Byeong-hun, racked up the biggest score of the day, hitting four balls in the water on the way to an octuple-bogey 11 - one shot lower than Bob Tway's record 12 in 2005.

McIlroy is the defending champion after winning the Players Championship two years ago, with the 2020 tournament cancelled prior to the second round because of the Covid-19 pandemic.

He made an awful start when he hooked his drive on the 10th into the undergrowth and had to take a penalty drop on his way to a double-bogey six.

The four-time major champion also three-putted the par-three 13th before hitting two balls into the water at the 18th, with another three-putt resulting in a quadruple-bogey eight that left him seven over par and 10 shots off the lead at that point.

A birdie from nine feet on the first hole saw McIlroy begin to repair some of the damage, and he made another on the second, despite again hitting a poor drive, but bogeys on the next two holes dropped him back to seven over.

He clawed one shot back at the fifth but another three-putt on the ninth saw him sign for a 79, equalling the highest opening round of a defending champion set by Sandy Lyle in 1988.

McIlroy's struggles were in sharp contrast to his playing partner Garcia.

The 2008 champion made an eagle on the par-five 16th and birdied the seventh and eighth before holing from 18 feet for a closing eagle to complete a superb 65 - his lowest opening round at the Players Championship.

"I've always said it, Valderrama and this course are some of my top favourite ones and for some reason it just kind of fits my eye," Garcia said.

Meanwhile, Norway's Viktor Hovland was given two penalty strokes after signing for a two-under 70, when it emerged he had inadvertently played his ball from the wrong position on the 15th green.

The world number 13, who is chasing a Ryder Cup spot, moved his ball marker one putter head to allow playing partner Justin Thomas to putt. When he went to replace his ball, he mistakenly moved the marker one putter head in the same direction he had already moved it and therefore played his next shot from two putter heads away from where he should have done.

However, instead of being disqualified for signing an incorrect card, Hovland was saved by a rule which states a player can be retroactively penalised shots for unknowingly violating a rule.

More in this category: « Arsenal net pair of late goals see off Olympiakos in Europa League. Van Den Berg back in the mix at Players Championship. »
back to top