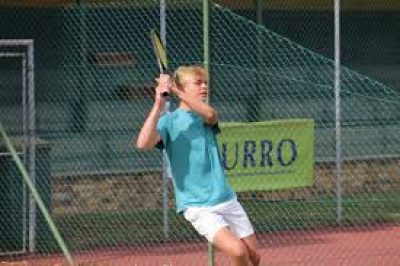 It was Super Friday for South African juniors at the Pretoria Junior ITF in Tshwane, as Devin Badenhorst and Suzanie Pretorius lifted the boys’ and girls’ singles trophies, respectively, at Rietondale Tennis Club.

The 16-year-old Pretorius, who hails from Bothaville in Free State, easily disposed of the Russian top seed 6-3, 6-3 in the girls’ singles final to claim the ITF Junior Grade 4 title in 1 hour and 45 minutes.

The Russian world No. 177 junior had been a strong favourite to get her hands on the trophy after reaching the finals without dropping a set, but she was outplayed by Pretorius.

“It is always a privilege playing against a top seed player like Elizaveta Shebekina. It was a next level experience with so much to learn,” commented Pretorius.

“Winning is every player’s dream no matter at which level. And to succeed is a privilege.

Pretorius will next move on to the ITF Junior Grade 5 tournaments starting on Monday at the North-West University in Potchefstroom.

In the boy’s tournament, top seed Devin Badenhorst completed a Pretoria Junior ITF double as he added the doubles title alongside Luc Koenig to the singles victory, he had claimed just hours earlier.

The 16-year-old Badenhorst bounced back after losing the first set then forged ahead in the decider to take the fight out of the spirited Koenig.

Just over an over after their singles final, Badenhorst and Koenig joined forces to win the doubles crown after edging out second seeds Connor Kruger and Anro Nel 7-6(2), 6-3 in just 64 minutes.

More in this category: « Roos ready to 'Go Big' on weekend at Dainfern. Zinedine Zidane unsure if Sergio Ramos will stay at Real Madrid. »
back to top