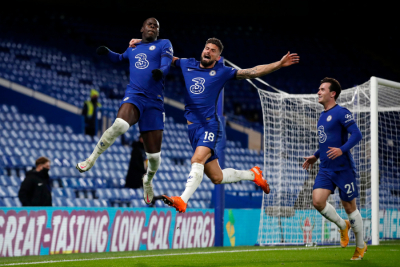 Chelsea dropped points against Leeds United on Saturday as Thomas Tuchel's side played out a drab 0-0 draw at Elland Road.

The result means Chelsea stay in fourth place. Leicester City have the chance to go five points ahead of them if they beat Sheffield United on Sunday.

"It is super hard to play the pitch. Very slippery and bouncy. We had a couple of chances to go 1-0 ahead but they trouble you and pressure you," Tuchel said after the game. "You need to make a goal for belief. Sometimes it is like this. I don't want to be too harsh.

"As long as we have chances and touches in the box and don't concede too many chances the results will be there. We need to accept this."

Despite lacking fans to add edge, both sides were unlucky not to score as they both hit the woodwork and tested their respective keepers.

Leeds almost went behind when Luke Ayling's clearance hit team-mate Diego Llorente and looped over keeper Illan Meslier to hit the bar before Eduoard Mendy tipped Tyler Roberts' chip onto the same part of his goal.

Kai Havertz wasted two good chances for the visitors as his Premier League goal drought continued, but he impressed overall in an advanced role.

While Tuchel will be disappointed his side did not claim victory to move about third-placed Leicester, his side were given a stern test.

And his run of 10 Premier League games unbeaten since the start of a new managers' reign is second only to Nottingham Forest's Frank Clark and Chelsea's Maurizio Sarri.

Leeds, who have only won one of their last six games, were dealt a blow in the first half when they lost top scorer Patrick Bamford, on his 100th appearance for the club, to injury in front of the watching England boss Gareth Southgate.

"He has been without playing for a long time and it is natural that it cost him a little bit in adapting to the rhythm," Bielsa said after the game.

"I value a lot the effort he put in when he was on the field because it is an effort that is above what he is actually capable of at this moment in time."