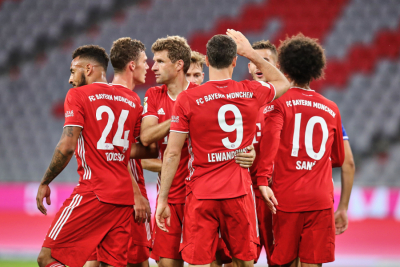 Bayern Munich cruised to a 3-1 victory at Werder Bremen on Saturday with striker Robert Lewandowski climbing to second place in the Bundesliga's all-time scorers list as the champions opened up a five-point lead at the top.

The 32-year-old Lewandowski, the 2020 FIFA World Player, twice hit the woodwork early in the second half before tapping in for to make it 3-0 and join Klaus Fischer on 268 Bundesliga goals, second on the all-time scorers list only to Gerd Mueller and his astonishing 365-goal record.

The Bavarians, who welcome Lazio for their Champions League Round of 16 second leg on Wednesday, were never troubled by the hosts, and Leon Goretzka headed them into the lead in the 22nd minute

Thomas Mueller then delivered his 13th assist of the season in the 35th for Serge Gnabry to slot in.

Lewandowski hit the post a third time in the 78th minute and Niclas Fuellkrug scored a late goal for the hosts as Bayern moved up to 58 points, with second-placed RB Leipzig, on 53, in action against Eintracht Frankfurt on Sunday.

VFL Wolfsburg climbed to third spot on 48 points with a 5-0 demolition of basement club Schalke 04.

More in this category: « Wales hammer Italy to set up Grand Slam finale against France. Real Madrid beat Elche with late Benzema brace. »
back to top