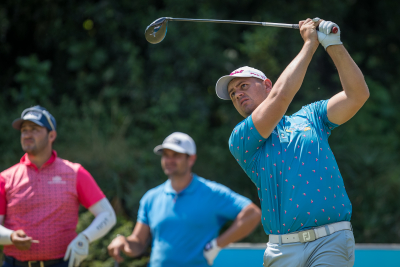 Daniel van Tonder finished birdie-eagle for a back nine of 29 and a 63 that shot him into a three-way tie for the lead going into Sunday's final round of the Sunshine Tour's Players Championship at Dainfern Golf Estate.

Van Tonder led another day of low scoring that finished with him on 18 under par. Jaco Prinsloo joined him there with a 66 after lipping out for an eagle on the last that would've given him the sole lead. And Oliver Bekker completed the trio with his bogey-free 67.

They are two strokes clear of Jacques Kruyswijk and Jake Roos.

But with the kind of scoring this tournament has seen – including a halfway cut of six under par – the three leaders are all in agreement that there is no holding back on the final day.

"This course isn't that long so most of the holes are birdie holes. But saying that, you've still got to hit the fairways here because the rough is thick," said Van Tonder, who has been in great form since the Tour resumed last August following the lockdown. He won four times in 2020, including three of the five tournaments on the Sunshine Tour's Rise-Up Series last year.

"It's going to feel like a shoot-out on the final day," added Bekker. "You can't play defensively because every hole is an opportunity to score. In the third round I just didn't really capitalise on the front nine, and then finally made something happen on the back nine."

The feeling was shared by Prinsloo.

"This course gives you the opportunities. I think it will help if you can get off to a fast start in the final round and try and keep the rest of the field at bay, but having said that, it usually comes down to the final few holes on the back nine."

More in this category: « Chippa United book a place in the Nedbank Cup semis. Formula 1 broadcasting legend Murray Walker dies at 97. »
back to top