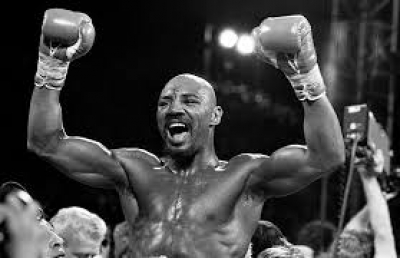 The American dominated the middleweight division from 1979 until his controversial defeat by Sugar Ray Leonard in April 1987.

He triumphed on 52 occasions by knockout, while he drew two and lost three times.

His most famous fight came in April 1985 when he fought Thomas 'Hit Man' Hearns over three brutal rounds - a classic known as 'The War'.

Hagler made 12 successful title defences until his defeat by Leonard by a split decision and he retired a year later.

"This one hits so hard also because he was the one I emulated my own training camps after when I saw how seriously he took his training camps. "

He added: "Not only was he a living legend, but I was proud to call him my friend. He was so full of life, energy and positivity in our conversations that you would never guess what a wrecking machine he was in the ring.

"Our wives would speak on the phone to connect us and I'll miss his voice saying 'It's Marvelous' on the other end of the line."

Former world featherweight champion Barry McGuigan said he was "shocked and deeply saddened" to hear of the "incredible" Hagler's death.

The Irishman added: "I'm honoured to have spent some amazing times with him. My heartfelt sympathies to his wife Kay and his family. Rest in Peace Champ."

British heavyweight Derek Chisora said Hagler was "one of the greatest".

Before the world super flyweight unification fight between Juan Estrada and Roman Gonzalez in Dallas on Saturday night, a "memorial count of 10" was led by ring announcer Michael Buffer, with the bell rung 10 times in Hagler's memory.

More in this category: « Burnley take leap towards safety with win at Everton. Lee Westwood and Bryson DeChambeau go head-to-head. »
back to top