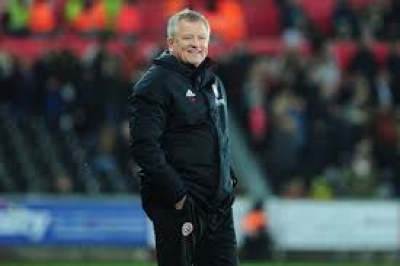 Sheffield United have confirmed that manager Chris Wilder has left the club after almost five years in charge.

Wilder has left with the Blades bottom of the Premier League, with 14 points from 28 games.

The ex-Sheffield United defender became manager of the Yorkshire club in May 2016 and took them from League One to the Premier League in that time.

"Being manager of Sheffield United has been a special journey and one I'll never forget," said Wilder.

A statement from the Bramall Lane club said the 53-year-old had left by mutual consent following discussions between the board and Wilder.

The club also confirmed Under-23s manager Paul Hecking bottom will take charge of the side for the rest of the campaign.

"We are confident that all Blades fans around the world will join us in thanking Chris for his hard work, commitment and expertise in driving the club," said a Blades statement.

"Now the club will turn its attention to completing the season as strongly as possible and, if we are relegated, to preparing for the Championship.

"We confirm our intention to keep the core of the player group together and will continue to invest further in the academy and the first team, to place us in the best possible position for the future."

Sheffield United finished an impressive ninth in the Premier League last season in their first year back in the top-flight.

This season has proved a real struggle and they have endured the worst start to a season in Premier League history, although they have reached the FA Cup quarter-finals.

Their first league win did not come until 12 January, in their 18th game, when they beat Newcastle.

"Today is a sad day for everyone at this great football club," said Blades striker Oli McBurnie on social media.

"Thank you for everything you did for me and my family gaffer, I will never forget it.

"We truly shared some fantastic times on and off the pitch together. Sorry we let you down in the end."

More in this category: « Lee Westwood and Bryson DeChambeau go head-to-head. Stones hits back at critics about Pep Guardiola's tactics in Man City win vs Fulham. »
back to top