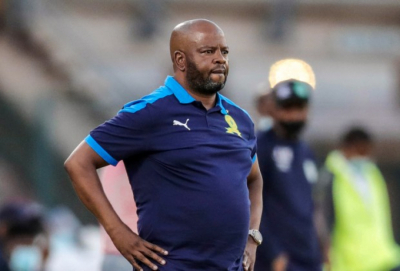 TP Mazembe will look to avenge their recent defeat at the hands of Mamelodi Sundowns when the teams meet in a CAF Champions League Group B clash on Tuesday.

Kick-off at the Loftus Versfeld Stadium in Tshwane is set for 6pm CAT (SA, GMT+2).

"We knew we were playing against a very good team, but our confidence was very high. We have played more than 20 games and we have not lost a game, which is also a good account for the team and the way we prepare. The boys fought hard," said Brazilians co-coach Manqoba Mngqithi.

Sundowns have since continued their fine form on the domestic front, advancing into the quarterfinals of the Nedbank Cup with a thumping 4-0 win over Polokwane City last midweek, followed by a 2-1 away win over Stellenbosch FC this past weekend which saw the Brazilians open up a four-point lead at the top of the DStv Premiership.

Mazembe, meanwhile, showed their potency in attack by thrashing Racing Club Kinshasa 6-0 in a domestic league clash last midweek – underlining exactly why they should not be underestimated by ‘Downs.

"Our team is not bad, we are just missing a click, a victory in an important game to comfortably build confidence. As we work, we hope it will happen. We are going to Pretoria on a mission and if we play like we did in the last two [domestic] games, we will be okay, "said Ravens assistant coach Isaac Kasongo.

Elsewhere Kaizer Chiefs will be aiming to build on their good record against Angolan opposition when they face Petro de Luanda (Petro Atletico) in a Group C 2020-21 Caf Champions League match at Estádio 11 de Novembro on Tuesday.

The Amakhosi beat their opponents 2-0 in the reverse fixture earlier this month with goals from Eric Mathoho and Happy Mashiane ending an eight-game winless run across all competitions.

Chiefs eliminated Atletico's rivals Primeiro de Agosto in the first round – winning 1-0 on aggregate as they progressed to the group stages for the first time.

"It looked like another night when we were not going to score with so many opportunities. But we got three points and that was the main thing for us.

"I think you need 10 or 12 points to get through. We got four and we still got three games left. It’s not going to be easy, we got Wydad coming here. They are not easy as they are very experienced in the competition. We have to go to Horoya in Guinea, and we’ve got to play in Luanda away, so it won’t be easy for us but we will do our best."

Ramahlwe Mphahlele will make his return after missing the reverse fixture through suspension following his sending off in Burkina Faso last month.

Over the years, South African sides have only suffered one defeat to Petro in nine previous meetings across the Champions League and Caf Confederation Cup competitions, and that came 20 years ago.

Twitter
More in this category: « India vs England T20 series goes behind closed doors after spike in number of Covid-19 cases. Carina Bruwer completes momentous 21km open water swim in aid of the arts and the Tribuo fund. »
back to top