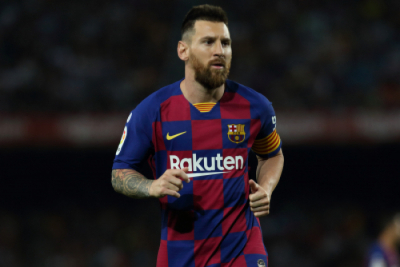 Barcelona moved back to within four points of La Liga leaders Atletico Madrid in a record-setting night for Lionel Messi as his team beat Huesca at the Camp Nou on Monday.

Messi was part of Ronald Koeman's starting XI, putting him level on career appearances in all competitions for the club with Barcelona legend Xavi at 767, and he also notched his 20th La Liga goal in his 13th straight season to become the first player in Europe's top five leagues to accomplish the feat

It didn't take long for Messi to mark the occasion with a goal, the Argentine working some of his patented magic in the 13th minute when he cut onto his left foot and curled a stellar shot into the upper left corner to give Barca the lead.

Antoine Griezmann doubled Barca's lead before 10 minutes before half-time with a near copycat goal of Messi's, picking up the ball from 30 yards out, cutting to his left and firing a shot into the same top corner as his teammate.

Rafa Mir cut Barca's advantage in half just before the break with an unstoppable strike from the penalty spot after Marc-Andre ter Stegen was whistled for a harsh foul in the area.

Messi popped back up early in the second half to help restore Barca's two-goal lead with a pinpoint cross into the box that Oscar Mingueza headed past Huesca's Alvaro Fernandez to make it 3-1.

Huesca tried in vain to find a way back into the game, but Barca held firm in defence to see out the match and pick up a crucial three points in their quest for a La Liga title that seemed unlikely earlier in the campaign.

And Messi added further gloss to the scoreline just before full-time with another stellar strike from distance that beat an outstretched Fernandez for his 21st in La Liga this season.

The result sees Barcelona, who now sit four points behind Atletico, remain the only unbeaten team in league play in Europe's top-five leagues since 2021 began.

Twitter
More in this category: « Carina Bruwer completes momentous 21km open water swim in aid of the arts and the Tribuo fund. Liverpool climb to sixth place with win at Wolverhampton Wanderers. »
back to top