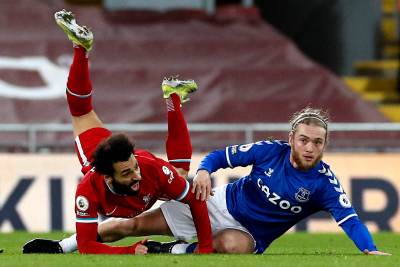 Diogo Jota rekindled Liverpool's Premier League top-four hopes with the winning goal on his return to Molineux in a game that ended with a worrying head injury to Wolves goalkeeper Rui Patricio.

Jota, who joined Liverpool from Wolves in September, drilled a low first-time shot under Patricio to settle a tight contest.

It was a fine way for the Portugal forward to mark his first appearance back at his former employers and it sees the Reds climb to sixth, two points behind West Ham in fifth and five off Chelsea in fourth.

In a game of few clear-cut chances Mohamed Salah saw a late effort ruled out for offside.

However, more distressing for the hosts was the sight of Patricio leaving the pitch on a stretcher after a lengthy delay following a collision with his captain Conor Coady, while trying to prevent the Egyptian from scoring.

The victory moves Liverpool to sixth place with 46 points from 29 matches, five points behind Chelsea for the final Champions league spot and two behind fifth-placed West Ham. Wolves, meanwhile, remain 13th with 35 points.