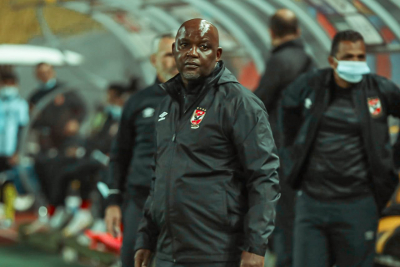 The Reds started their group-stage campaign in wonderful fashion after beating Al-Merrikh 3-0 at home; however, two disappointing results followed as they lost to Simba away, before drawing with Vita Club at home.

The results left them third in Group A left with four points, behind the DR Congo based-club on goal difference, which meant a win in Kinshasa is a must if they want to continue their journey in the competition.

And this is exactly what Mosimane’s men did, thanks to goals from Mohamed Sherif, Mohamed Magdy Afsha, and Taher Mohamed Taher.

Speaking of the encounter, Pitso said: "Football is a lesson for us and everyone in dealing with opponents.

"In Cairo, we created more than 20 chances but we did not score. Today, we had a few chances and scored three goals, you have to wait for success and luck.

"There are those who talked poorly about Al Ahly. We accept criticism, and it is natural for a coach of a team of size as Al Ahly to be criticized.

"I have full confidence in the players. I don’t say this because we won, but I said the same thing after the previous match.

"Yes, this is not the best generation in the history of the club, but this generation is wonderful and distinguished. They have a strong personality and won trophies and clinched the bronze medal in the Club World Cup. I trust this group.

"The second half, I modified the way of playing because I expected the pressure of the Vita Club players as they are 2-0 down, as well as the presence of their fans.

"These matters would have affected them in the second-half and therefore their pressure would have been greater."I tried to take advantage of the spaces behind their defence and play on the counter, and we succeeded and scored the third goal."AS Vita Club is side that should be respected and always play well inside and outside of their stadium," he added.