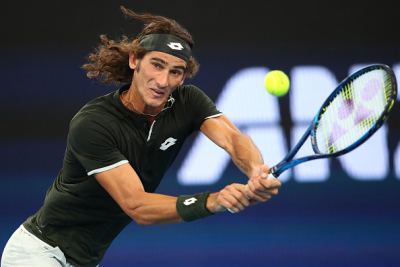 Lloyd Harris earned the biggest win of his career on Tuesday, when he stunned top seed Dominic Thiem 6-3, 6-4 at the Dubai Duty Free Tennis Championships.

The South African dropped only one point behind his first serve (29/30) and struck 23 winners to eliminate the US Open champion after 72 minutes. This is Harris’ first win against a Top 5 player. The 24-year-old claimed his first Top 20 win at last week’s Qatar ExxonMobil Open against Stan Wawrinka.

"I’m super, super happy with that win. [He is] by far the highest-ranked player I have beaten," Harris said in an on-court interview. "I look up to Domi a lot so, for me, it is a special feeling. I am really happy. Just the fact that I am playing good tennis, match in, match out now is giving me a lot of confidence."

Harris was happy to engage in backhand-to-backhand rallies early in the first set. The South African proved the more consistent player on the stroke to earn the first break points of the match at 2-1 and he converted his second chance with a cross-court backhand winner.

Throughout the match, Harris held serve without being forced to deuce. The World No. 81 earned the only break of the second set at 3-3, when he rushed Thiem with deep backhand returns and capitalised on two double faults. Harris closed the match with a powerful first serve into Thiem’s backhand.

"I was serving really well. I don’t think I faced any break points," said Harris. "I took control of those games and [in] one or two games on his serve, I gave myself a good look. I played some of the important points very well. I am very proud of that."

"[I had] troubles returning his serve," said Thiem. "[There were] also way too many easy mistakes from my side, from the baseline. I said a couple of days ago that if I am not playing at my best level, it is not enough against all of the players in the draw."

Twitter
More in this category: « Chiefs remain in hunt for knockout phase while Downs qualify for CCL last eight. Bloemfotein Celtic confirms the sacking of CEO Khumbulani Konco. »
back to top