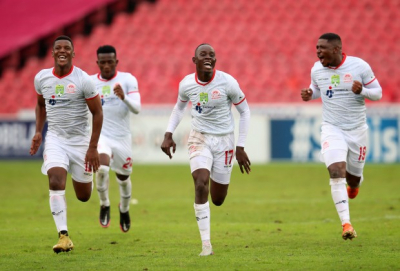 Sekhukhune United and Richards Bay FC continue to set the pace in the GladAfrica Championship following narrow 1-0 wins in their respective matches on Wednesday.

The two teams are locked on 31 points atop the 2020-21 league standings, but Babina Noko have played a game more than the Natal Rich Boyz.

McClive Phiri scored a late winner for Sekhukhune against Bizana Pondo Chiefs in Tembisa, while Siyabonga Vilane continued his good run of form in front of goal with the match winning strike for Richards Bay against Pretoria Callies.

There were also wins for Pretoria University, Free State Stars, JDR Stars and TS Sporting in matches scattered across Tuesday and Wednesday this week, with the latter notching up a third straight victory to move into the top five.

Stars beat Cape Town Spurs 2-1 in the Mother City as the Hammer Boys added to the Urban Warriors' woes. Spurs have struggled at home throughout the course of the campaign and remain rooted to the bottom of the league standings.

Twitter
More in this category: « Gifted Hugo proud of his ongoing Sunshine Tour success. Proteas Women complete 4-1 series win over India with victory in fifth ODI. »
back to top