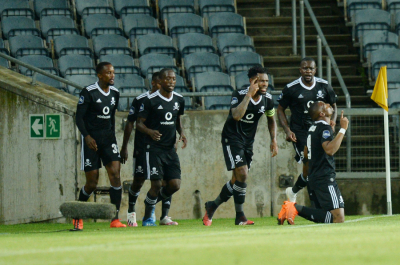 Orlando Pirates registered their first win in Group A after defeating Enyimba 2-1 in CAF Confederation Cup action on Wednesday evening.

Pirates made three changes to the team which faced Setif with Ntsikelelo Nyauza, Siyabonga Mpontshane and Innocent Maela making their return to the starting line-up.

The Soweto giants were targeting nothing but a victory after starting their group stage campaign with a 0-0 draw against former Algerian champions ES Setif in Ghana on March 10.

Pirates pressed Enyimba from the first whistle and the visitors struggled to contain Hotto and Linda Mntambo, who were combing well in the visitors' half.

The hosts opened the scoring three minutes before the half-hour mark when Mntambo set-up Hotto, who scored with a backheel to make it 1-0 to Pirates.

The Aba Warriors then took control of the match and they began creating chances as Oladapo forced Pirates goalkeeper Mpontshane into a fine save, before Samson Obi missed the target from close range.

Enyimba were awarded a penalty after Mpontshane was adjudged to have fouled Anayo Iwuala in the box and Oladapo scored from the spot-kick to make it 1-1 on the stroke of half-time.

Hotto continued to harass the Aba Warriors' defence with his sharp movement in the visitors' half after the restart and he did well to play a through pass for Vincent Pule.

However, Enyimba goalkeeper John Noble came out and produced a smart save to deny Pule as the Buccaneers looked to restore their lead.

Pirates were given a chance to regain the lead in the remaining 12 minutes after Mhango went down in the area, but Mabasa slipped and sent his penalty over the crossbar.

Mabasa made amends in the last minute as he snatched the winner for the Buccaneers with a header at the near post from a corner to send the Soweto giants top of Group A.

The result saw Pirates climb up to the top of the group standings, while Enyimba slipped down to second place with four matches left.