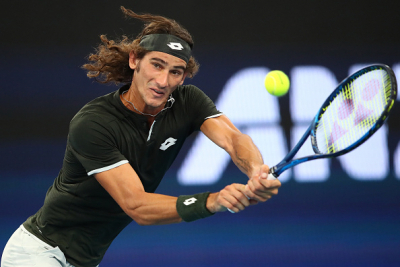 Having saved two break points in the deciding set, the match turned in the eighth game when Nishikori overhit a forehand to hand Harris a chance to serve for a place in the semi-finals.

"I have a few matches under my best now," said Harris. "It’s starting to feel like my home court. I am really enjoying it out here and played really well on the break points [in the third set]."

Nishikori admitted, "He took the chance at the end and served well for sure. I have a couple of chances, but he hit his forehand and backhand well."

The 24-year-old hit 22 of his 34 winners off his serve for his fourth win of the week. He will now play third seed Denis Shapovalov on Friday at the Aviation Club.

When asked about what he put his good form down to, and his next opponent, Harris said: "I think I’ve spent more time on the Tour now and built confidence. Denis has played some fantastic, dynamic tennis and it will be a tough challenge."

Harris, who earned the biggest win of his career over top seed Dominic Thiem in the Dubai second round, won the first five games of the match, but it was a different story in the second set when Nishikori took a 4-0 lead.

He is projected to break into the Top 70 of the FedEx ATP Rankings on Monday.

Twitter
More in this category: « Arsenal,Granada & Roma through to the quarter-finals of the Europa League. Dinamo Zagreb stun Spurs as brilliant Orsic nets hat-trick. »
back to top