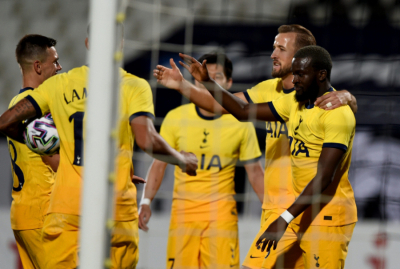 Tottenham were knocked out of the Europa League as a sublime hat-trick from Mislav Orsic completed a remarkable second-leg turnaround for Dinamo Zagreb.

Leading 2-0 after a one-sided first encounter in London seven days earlier, Spurs - who made seven changes - paid the price for a desperately poor performance against the Croatian champions.

Orsic deservedly curled the hosts ahead on the night with a wonderful strike from the edge of the box and swept home Iyayi Atiemwen's cross to bring the tie level.

He added a superb third at the start of the second period of extra time, driving at a terrified Tottenham defence before firing another fine finish into Hugo Lloris' bottom corner.

Tottenham twice almost snatched salvation and progress at the end of both normal and extra time but Harry Kane was thwarted on each occasion by superb saves from Dinamo keeper Dominik Livakovic.

Spurs piled on the pressure in the closing stages but Dinamo held out to earn a fully merited place in Friday's quarter-final and semi-final draws.