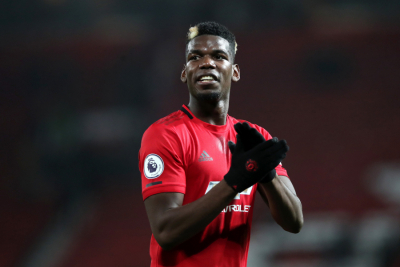 Paul Pogba returned from injury to send Manchester United into the Europa League quarter-finals and manager Ole Gunnar Solskjaer says the midfielder will continue to make a big impact in the final stages of the season.

The Frenchman scored the winner against AC Milan at the San Siro three minutes after being introduced as a half-time substitute in the second leg of an evenly poised last-16 tie.

"The boys have done remarkably without Paul but we know his qualities," Solskjaer said.

"He makes a very, very big difference to us. Paul has been working really hard, but you could see he couldn't play more than 45 minutes."

The 28-year-old was making his first appearance in the competition this season, after coming back from a thigh injury which has kept him out since 6 February.

Until his intervention, Solskjaer's side had rarely looked like breaking the deadlock against a well-organised Milan team who also appeared capable of adding to the late away goal that had swung the tie in their favour at Old Trafford.

Rade Krunic, Alexis Saelemaekers and Theo Hernandez all threatened the visitors' goal before the break.

Zlatan Ibrahimovic was summoned from the bench to try to rescue the tie, but United goalkeeper Dean Henderson superbly saved to prevent the Swede from scoring against his former team with a back-post header.

Henderson, who was excellent throughout, also brilliantly turned away an earlier effort from Saelemaekers.

United join Arsenal in the draw for the quarter and semi-finals on Friday at 12:00 GMT.

Meanwhile Slavia Prague inflicted Rangers' first defeat at Ibrox in just over a year to knock the nine-man Scottish champions out of the Europa League.

Twitter
More in this category: « Dinamo Zagreb stun Spurs as brilliant Orsic nets hat-trick. Jose Mourinho 'sorry' after a loss to Dinamo Zagreb and Lloris calls exit 'a disgrace'. »
back to top