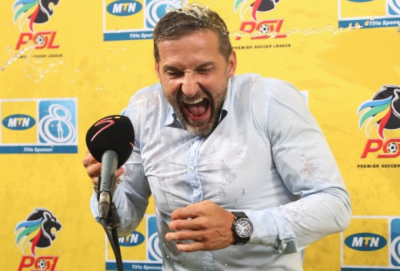 Orlando Pirates coach Josef Zinnbauer says his side will have to be at the top of their game to beat Kaizer Chiefs in the Soweto Derby at FNB Stadium on Sunday.

Pirates have already defeated Chiefs three times in all competitions this season, scoring seven goals and conceding only one, but Zinnbauer says the AmaKhosi have more than enough quality to defeat his team.

"We know they have quality players and a quality coach [Gavin Hunt], he knows exactly how to fight for titles. He has a lot of experience and knows what to say to the players," Zinnbauer told reporters.

"We know they are struggling a bit in the league, but there are signs they are coming better and better. The mood [at Pirates] is good at the moment, but we know it is a special game and we will need full concentration if we are to win the points."

Pirates could claim a fourth successive victory over Chiefs for the first time in their history in what is also the 100th league meeting between the sides, but Zinnbauer believes his team should not get sucked into looking at records and simply focus on the three points.

"We have to win the game, that is the most important. We have a lot of work to do, we cannot speak about four wins in a row, we have to win this game and focus on this match only.

"It is not important for me that it is the 100th [league] Soweto Derby, yes for the journalists, supporters and the clubs maybe, but for me as a coach you don’t get more than three points in this game.

"It is a hard game for us against a top opponent and we will have to play well."

Meanwhile Kaizer Chiefs coach Gavin Hunt has found Orlando Pirates a difficult opponent down the years, and will be seeking to improve his win ratio when he leads his side in the Soweto Derby at FNB Stadium on Saturday.

Hunt has met Pirates on 61 previous occasions as a coach and claimed victory in 19 of those games, a 31 per cent win percentage that he will hope to drive up in the coming years at Chiefs.

It has not started well for him, with the AmaKhosi having lost all three previous encounters against their great Soweto rivals this season, but Sunday brings another opportunity to change that.

Hunt’s most successful time against Pirates by far was while with Bidvest Wits, when he secured nine wins and three draws in 19 matches for a win ratio of 47.4 per cent.

It is the only club where he has won more games against Pirates than he has lost (seven).He won exactly a third of matches while at SuperSport United, six from 18 encounters, and three from 13 (23.1 per cent) at Moroka Swallows.

He managed a draw and a defeat in his only season at Black Leopards in 2001-02, while at Hellenic he secured one win in six games (16.7 per cent).Hunt’s overall record against Pirates in all competitions reads 19 wins, 17 draws and 25 defeats in his 61 games.