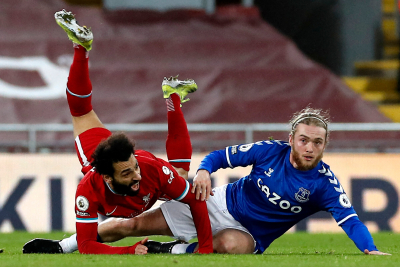 Liverpool will face Real Madrid in the quarter-finals of the Champions League.

Manchester City have been drawn against Borussia Dortmund, while Chelsea play Porto and defending champions Bayern Munich take on Paris St-Germain, the team they beat in last year's final.

In the semi-finals, the winner of the Real Madrid v Liverpool tie will face Porto or Chelsea and Manchester City or Dortmund will take on Bayern or PSG.

Liverpool and Real Madrid met in the 2018 Champions League final with the Spanish club, who have won the competition a record 13 times, winning 3-1.

The two teams have played each other six times in Europe's top competition, with both winning three games apiece, including Liverpool's 1-0 victory in the 1981 final.

Premier League leaders Manchester City have only met Dortmund in the group stage of the Champions League, with the English side drawing 1-1 at home and losing 1-0 in Germany in 2012.

Chelsea have played Porto eight times, winning five and losing two, and beat the Portuguese side 3-2 on aggregate in their only knockout tie, which came in the last 16 in 2007.